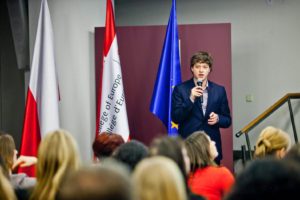 Dr Quincy R. Cloet is a specialist of international organisation and has obtained his DPhil from the Department of International Politics at the University of Aberystwyth.

In September 2020, he was awarded the BIHG Michael Dockrill Thesis Prize for the best doctoral thesis on any aspect and any period of International History. The jury lauded the thesis “for its international breadth, interdisciplinarity and depth of archival research.”

In 2019, he became the recipient of the College of Europe – Arenberg European Prize for “an original work of critical analysis that offers a fresh approach to key challenges faced by Europe and Europeans in the present and future.” Read a brief version of the article here and the prize announcement here.

At present, he works as an anti-money laundering analyst and quality checker at the Financial Crime Unit of PwC Polska. In May 2022, he was given an X-FCU Performance Award for his ongoing contributions to a project.

In 2021, he helped to set up the Europe in Review monthly newsletter published by the German-Southeast Asian Center of Excellence for Public Policy and Good Governance (CPG), which is based in Bangkok. From August 2019 until June 2021, he worked as Managing Editor for Visegrad Insight at the Res Publica Foundation in Warsaw.

Between February 2019 and August 2020 he was a project researcher cooperating with the Helsinki Foundation for Human Rights on human rights violations in Eastern Ukraine.

From 2015 to 2018, while working on his DPhil, he was a part-time teacher at the Department of International Politics at the University of Aberystwyth, focusing on international history and security. In the summer of 2017, he became an Associate Fellow of the UK’s Higher Education Academy. He previously worked as a Research Assistant for the College of Europe (Natolin Campus, Warsaw) from 2013 until 2015.

Dr Cloet was Book Reviews Editor for the Journal of Contemporary European Research (JCER) as well as an active committee member of the UACES Graduate Forum (the association for European Studies in the UK) between 2016 and 2018. As a committee member, he also served as Editor for the Graduate Forum/JCER blog Crossroads Europe. In 2017, he was awarded a grant from UACES, to be the first historian to explore the association’s archives at the Historical Archives of the European Union in Florence. 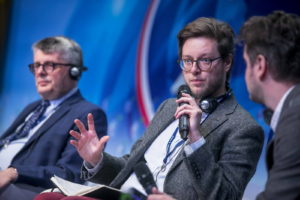 In 2017, Dr Cloet co-edited a volume on the First World War, entitled Breaking Empires, Making Nations? The First World War and the Reforging of Europe. Previously, he published two book chapters and one monograph in the fields of international (migration) history and European integration history. Quincy is currently working on a range of articles related to knowledge production in the fields such as foreign policy, European integration and international organisation.

During the Spring of 2017, he resided at the Graduate Institute in Geneva as a Junior Visiting Fellow, to conduct archival research at the UN Library. For the academic year 2018-2019, he was based again in Warsaw as a Visiting Fellow at Collegium Civitas. He is a close observer of Central European politics and society and writes about these subjects in English and Dutch.

Quincy was a music editor at enola.be for over a decade until 2020: he primarily wrote about jazz, blues, minimalist and experimental compositions. Next to music, his interests are cinematography, literature, languages and cooking.

Please get in touch with him via Twitter or email.

This site is part of Humanities Commons. Explore other sites on this network or register to build your own.
Terms of ServicePrivacy PolicyGuidelines for Participation